The Problem I Have With Windows

Home » Blog » My Opinion » The Problem I Have With Windows

As A IT Engineer 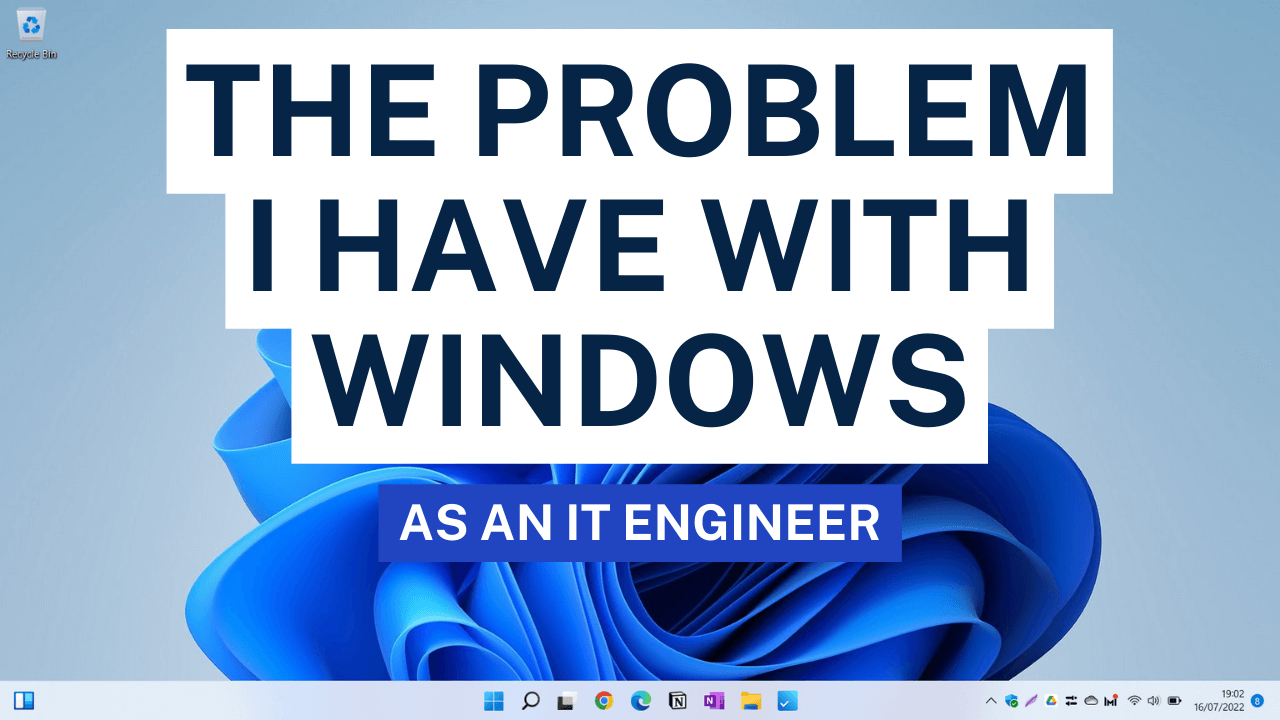 I think it’s fair to say that I am a long-term Windows user, I mean I remember growing up using Windows 95 and Windows XP at school followed by every other version of Windows since Windows XP.

I was always a fan of Windows, I mean it worked well and I learned everything I know about IT using some form of Windows operating system. I even liked the interface of Windows Vista! I know, an unpopular opinion, but it was something new!

Here’s the thing, with the rise of smartphones as well as the mobile-first approach to websites and software, I kind of feel let down by Microsoft. I mean they are trying really hard to improve the user experience, but as someone who works in IT, I feel that it is letting users down.

I wanted to start this article by talking about Windows 11, which I used since the early Insider Previews. I was incredibly excited when Microsoft announced Windows 11, especially as Windows 10 was meant to be the last edition of Windows.

From the very beginning, I was a fan of the new and updated interface, I felt that the Windows 10 interface was dated. There was nothing really new about the interface since Windows 8.1. That’s one of the reasons I like the idea of the centred Taskbar items.

But, while Microsoft has redesigned a wide variety of things on Windows 11, I don’t like the one for all approach. I mean, Microsoft needs to cater for everyone and that’s something that can be seen when setting up Windows for the first time. But, I find that picking the way you want to use Windows doesn’t really do much.

One area where I believe that Microsoft needs to improve is Windows Explorer. As a professional user, I want to have the right-click options menu set to show all options by default, as in its current form where you have an extra step is more cumbersome.

I get that the simple view looks more pleasing to look at but if you plan to use Windows in a professional environment, it can cause issues, especially for someone who is new to the operating system.

One example of where this could be an issue is if a user needs to use software available from the right-click options menu, it could be something like 7-Zip or any other application, the user will need to complete extra steps to get there. I know it’s just one step, but to a new user who recently migrated from Windows 10, that option is missing and they will want it back.

On top of that, if the user is doing the same task all day, that one extra step will feel cumbersome and it will make the user feel that they are wasting time, after all, if you are doing repetitive tasks, that one step will build up in terms of time.

That’s why the simple view should be used in a home environment, not a professional or enterprise environment.

The second issue I have with Windows 11 is the support for older hardware. I have a perfectly fine, working Dell Optiplex 390 which is around 8 years old. The device still works incredibly well and I actually use it as a NAS Server. But unfortunately, it won’t run Windows 11 by default, which is sad. Particularly when you go to offices, shops and other establishments and see that so many of these older PCs are still in use today.

Windows tends to be a very good operating system, a great choice for businesses, professionals and for general use. But I strongly believe that Microsoft needs to work on usability, particularly from the point of view of organisations.

Let’s take Windows 11 out of the equation for a minute, as a whole, I find Windows to be slightly outdated, especially when we compare it to new versions of macOS and Linux distributions such as Ubuntu. I mean Microsoft has seriously improved the interface and the feel of Windows 11 and even Windows 10 to some extent.

But using Windows feels kind of old school, I don’t know about you, but I don’t get that excitement I get when I use Linux, macOS or even Android. It could be just me being used to Windows. But I feel that the operating system needs a major overhaul, hopefully, it’s something we’ll see with Windows 12 and for the better.

But it is a difficult task to achieve, as some people prefer Windows how it used to be and some don’t. So maybe, Microsoft should design a completely new operating system, one that is maybe based on Windows but is more modern as a whole.

My Advice For Microsoft

As someone who works in IT, I think it’s fair to say that I have an insight into the type of issues and queries people have when it comes to Windows. Having this knowledge, you tend to see things that perhaps others don’t see.

According to statistics found on Statcounter, Windows 10 tends to be the most used desktop operating system as of November 2022, with 69.75% of people using it worldwide. There’s no surprise there. But with that in mind, Windows 11 only has 16.13% of users worldwide. There’s definitely a problem there!

Now I don’t know what’s stopping people from upgrading, it could be many things, but based on my own experience as well as feedback I receive from others, usability seems to be a key issue. Microsoft has brought in a lot of change, which is a good thing, but people seem to be struggling to adapt, that’s why my first point is to cater the operating system to the user.

Cater Windows To Match The User

I remember a time when we had several different editions of Windows, Windows 7 had 6 different editions, 6! These included Windows 7 Starter, Home Basic, Home Premium, Professional, Enterprise and Ultimate. I don’t see the need for Microsoft to take this route again, although it wouldn’t hurt to have a special edition aimed at enterprise environments.

What I would like to see is during that initial setup process, if you are a professional user, you select the professional or for work option and the operating system then caters the settings based on that. For example, if you are using the computer mainly for work and professional reasons, selecting these options will enable the advanced views changing things like the right-click options menu in Windows Explorer to the full menu.

I fully understand that the minimum requirements are there for performance and security reasons, but there isn’t really a benefit of stopping people from using the system if these conditions are not met. Surely, you can disable the feature instead of stopping the system from being installed altogether?

As someone who works in the IT industry, I see several businesses using older equipment that is still perfectly capable but won’t run Windows 11 due to the specs. In fact, I don’t see any reason that some of these devices won’t last past the Windows 10 end-of-support date, which is the 14th of October 2025.

Continue To Work On The Operating System!

My final advice is that you continue working on the operating system. Windows is and always will be a legendary operating system. Yes, there may be lemons, but without them, you cannot improve or make things even better for the user and you as an organisation.

To summarise this article, the one thing I find problematic with Windows is usability, something that can refer to a lot of things, but allow me to explain. Apart from the things I mentioned above, Windows can be a bit confusing, especially for people who are new to the system.

Another area, I think would make the system more usable is the Start Menu on Windows 11, I feel that a lot of potentials is wasted there. I mean I was actually a fan of the Windows 10 one, as some of the Tiles acted like widgets and every time I went to the start menu I saw them. I don’t tend to visit the separate Widgets menu on Windows 11 as often as I visit the start menu.

But as a whole, I still like Windows and will continue to use it.

What are your thoughts on Windows? Do you agree with some of my points? Let us know in the comments!

3 Subscriptions Worth Having In 2023 Subscriptions I Cancelled At The Beginning of 2023
Manage Cookie Consent
We use technologies like cookies to store and/or access device information. We do this to improve browsing experience and to show personalised ads. Consenting to these technologies will allow us to process data such as browsing behaviour or unique IDs on this site. Not consenting or withdrawing consent, may adversely affect certain features and functions.
Manage options Manage services Manage vendors Read more about these purposes
View preferences
{title} {title} {title}