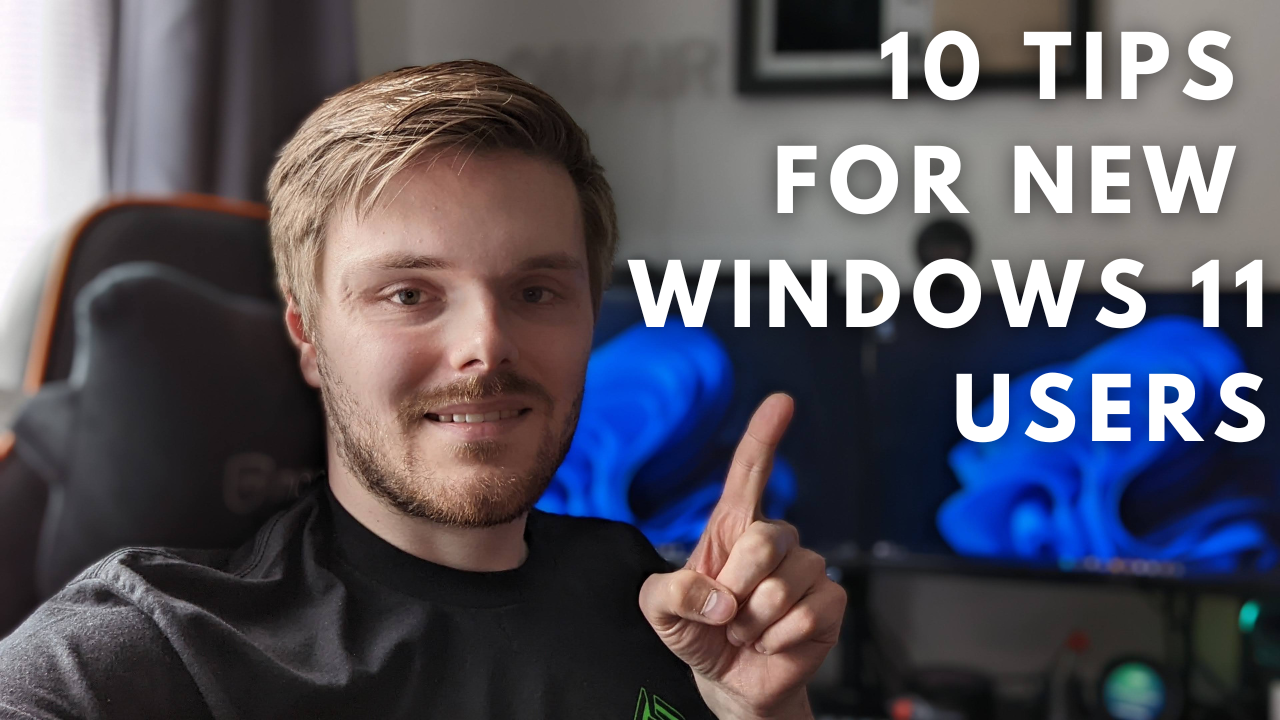 I’ve used Windows operating systems ever since I can remember and I think it’s safe to say that I’ve seen a few big changes over the years, from shiny new interfaces to new features. I’ve also seen Microsoft discontinue features such as the desktop widgets (trying not to cry).

I’ve been on Windows 11 from the very beginning, from way before it was officially released to the public. I started with the Windows 11 Insider preview. I remember first hearing the news and being extremely excited about the system. I’ve now been running it on my main PC for what feels like forever and I wanted to share 10 tips for new Windows 11 users.

I seriously think that Microsoft has done it right this time, especially when combining the new productivity features and the new working from home ethics. I also really like the new interface. However, my full opinion and review can be found here. 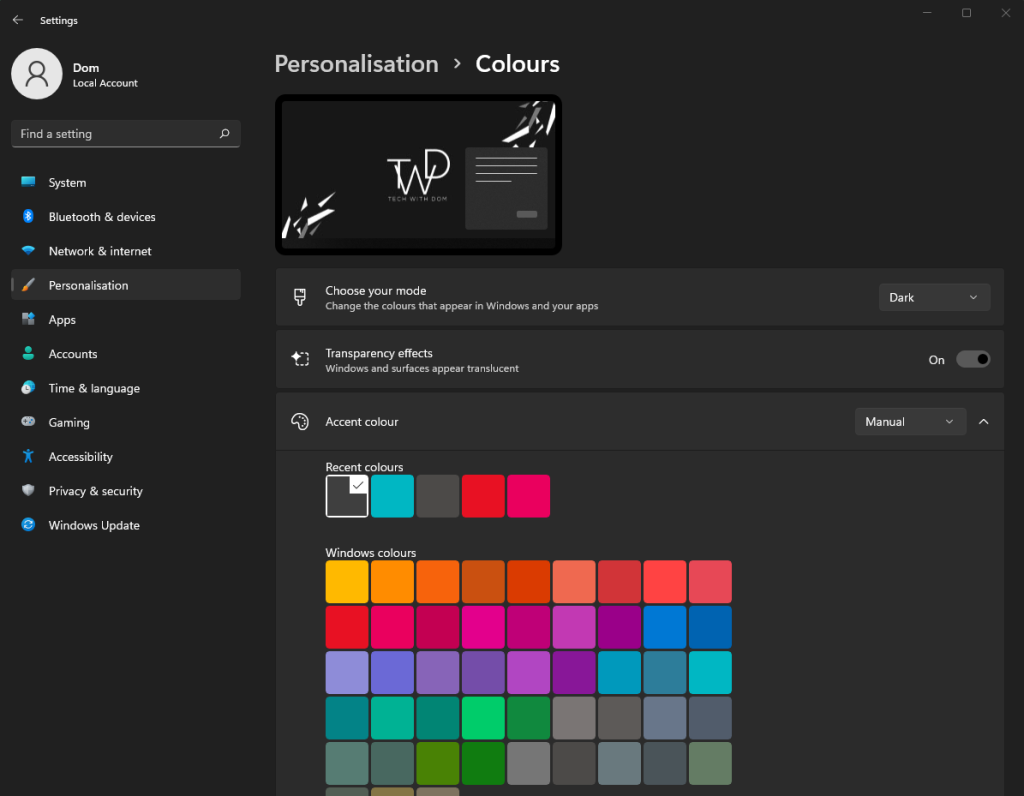 Are you not a fan of the new light interface? I’m not a huge fan because I find it too bright and uncomfortable to work with for extended periods of time. Like with Windows 10, you can enable dark mode.

To do this you simply go to Start > Settings > Personalisation > Colours and from here you can set your mode to dark. 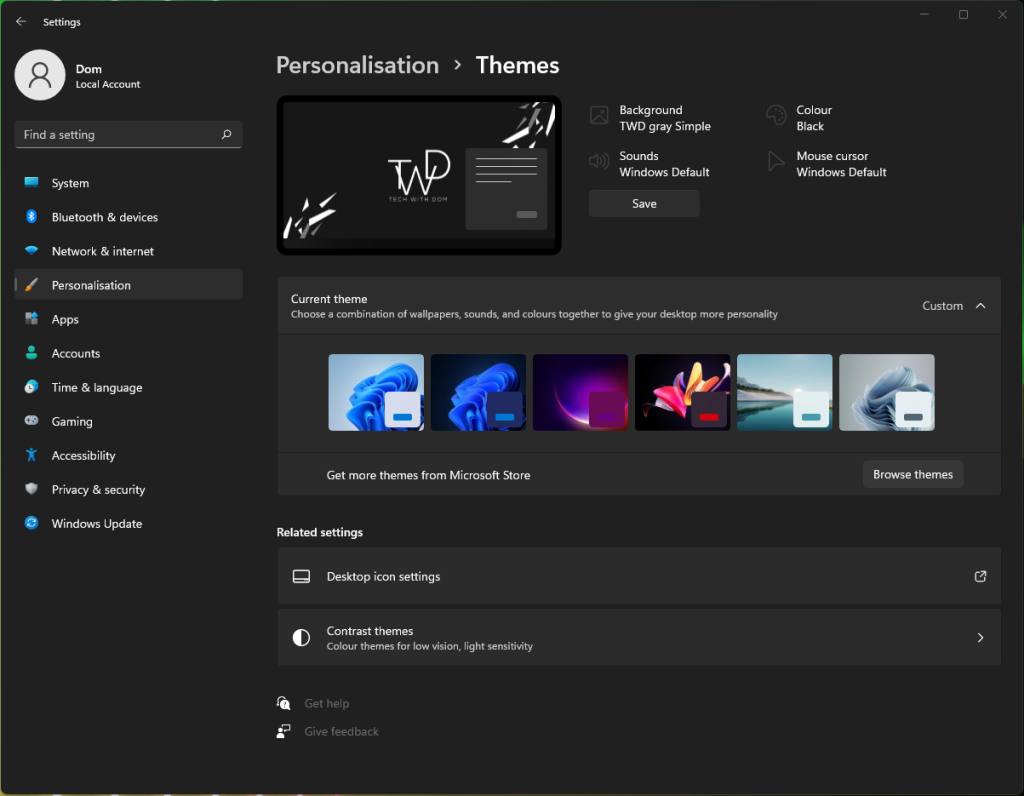 Staying on with personalisation, Microsoft has reintroduced themes! This was a popular feature in Windows XP, Vista, 7 and 8 but for some reason, they decided not to include them in Windows 10. By default, the system gives you access to 6 different themes but you can download more from the Microsoft Store. 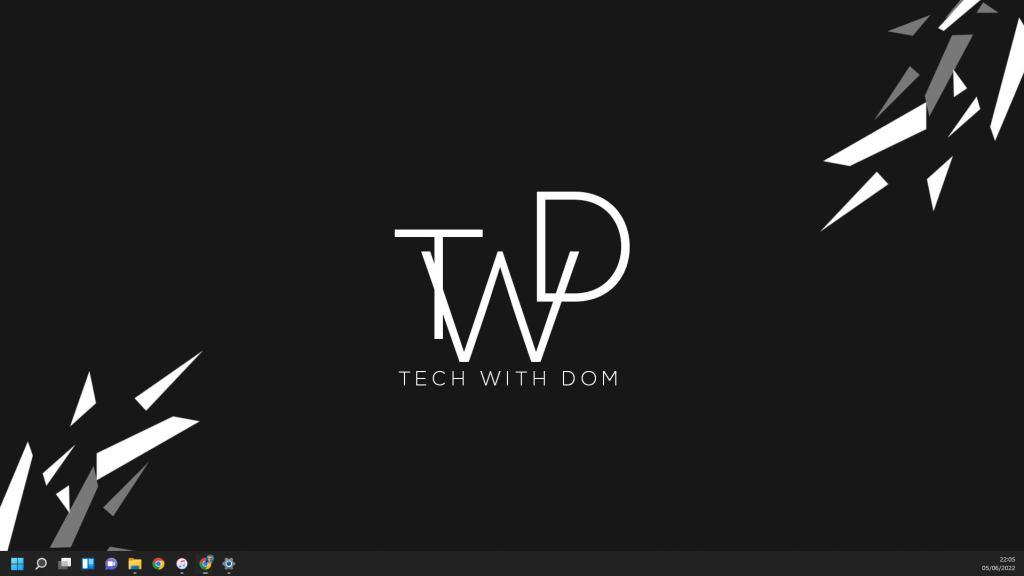 For the first time ever, Microsoft has decided to move the start button to the middle of the taskbar causing a lot of mixed views and opinions online. I actually quite like it in its new location as it makes the bar look more modern and cleaner.

According to Microsoft, the change was made after years of research and testing by Microsoft designers who found that a centred approach, combined with the new start menu lets users quickly access files as well as apps. This article from the Wall Street Journal discusses this in more detail. I also remember reading somewhere that the whole idea of this approach is because by default your eyes look in the centre of the screen making a centred start button more efficient.

However, you don’t have to like this new approach and Microsoft has made it easy for you to switch back. You simply right-click an empty space on the taskbar and go to Taskbar Settings > Taskbar behaviours and under the dropdown next to taskbar alignment, select “left”.

With the release of Windows 8, Microsoft decided to discontinue widgets due to various security concerns at the same time leaving a lot of users including myself disheartened. However, Microsoft decided to bring this back to life in Windows 11 but not in a way you’d expect. It’s now inside a sidebar and I think it’s a better approach, mainly because of the fact that you can access it from any screen instead of having to go back to the desktop. The widgets seem to have become more useful too.

You can add widgets by simply pressing the big plus on the top right-hand side corner and selecting the widgets you want.

5. Focus on Your Work With Focus Sessions 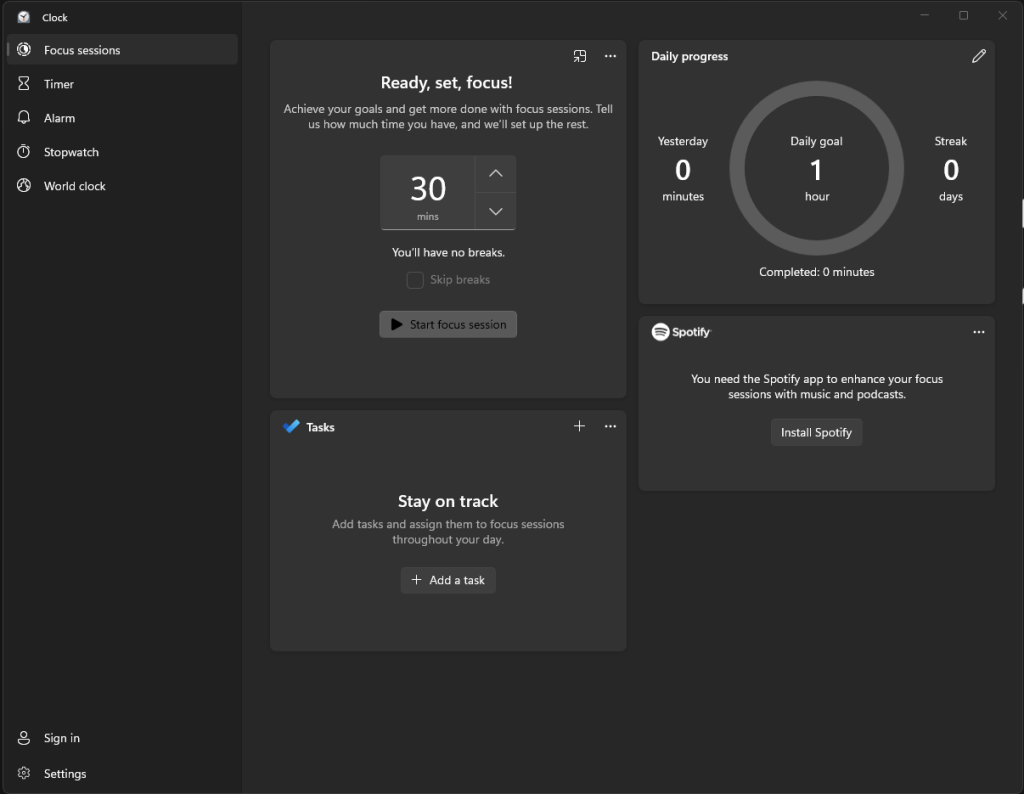 Windows 11 focuses on productivity. That’s why they redesigned a lot of the features and apps. One of these apps is the Alarms and Clock app which now includes the Focus Sessions feature. I actually just started making use of this and I think I like it. I mean it’s different from my usual Pomodoro approach of 25 minutes of uninterrupted work to a 5-minute break but the extra 5 minutes is not a big issue.

This type of feature is perfect for working from home, especially if you easily get distracted. I mainly use this for bigger projects where I need to be at my computer for extended periods of time, but it’s not really a new approach for me as I have used a similar approach throughout university, but I could never find an app good enough for Windows. I mean the only app that I actually really liked was Gnome Pomodoro which was an app designed for Linux operating systems.

Personally, I think the new productivity approach will help Microsoft go a long way. I mean before Windows 11 was even rumoured to be announced, I was seriously considering completely moving away from Windows in favour of macOS, but Windows 11 changed that.

6. Pin Apps to The Start Menu 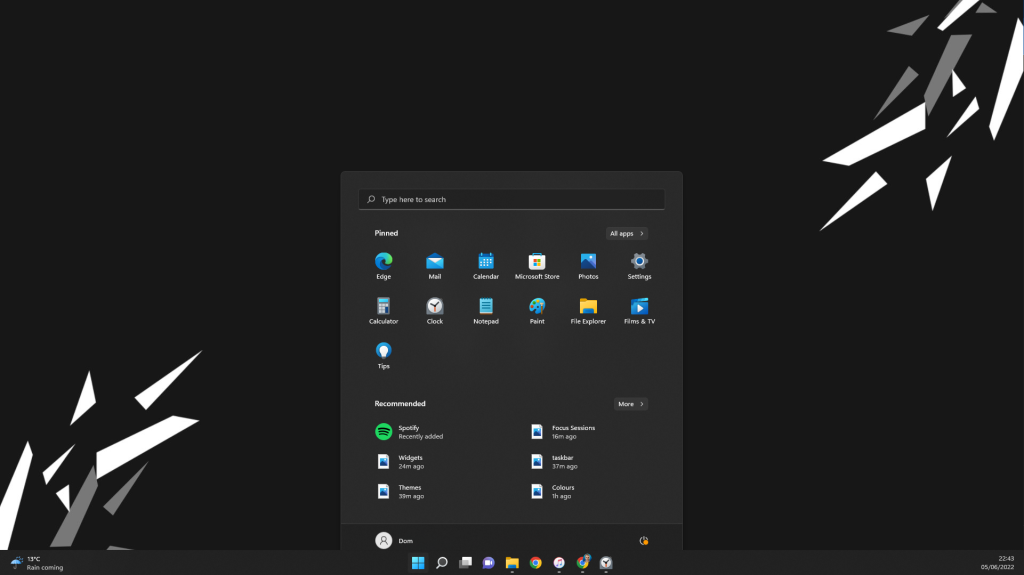 The Windows 11 start menu got given a massive makeover, getting rid of tiles and at the same time marking the end of a not so successful tile era. Personally, I quite liked the tiles and the idea of having my calendar and weather apps within the start menu, the interface worked really well on both desktop and even Windows Phone which I actually do quite miss!

The idea of this design is to make the apps you use most often easily accessible to improve your productivity. Pinning an app is very easy, you simply go to all apps and find the app you want to pin, right-click it and select “Pin to start”. 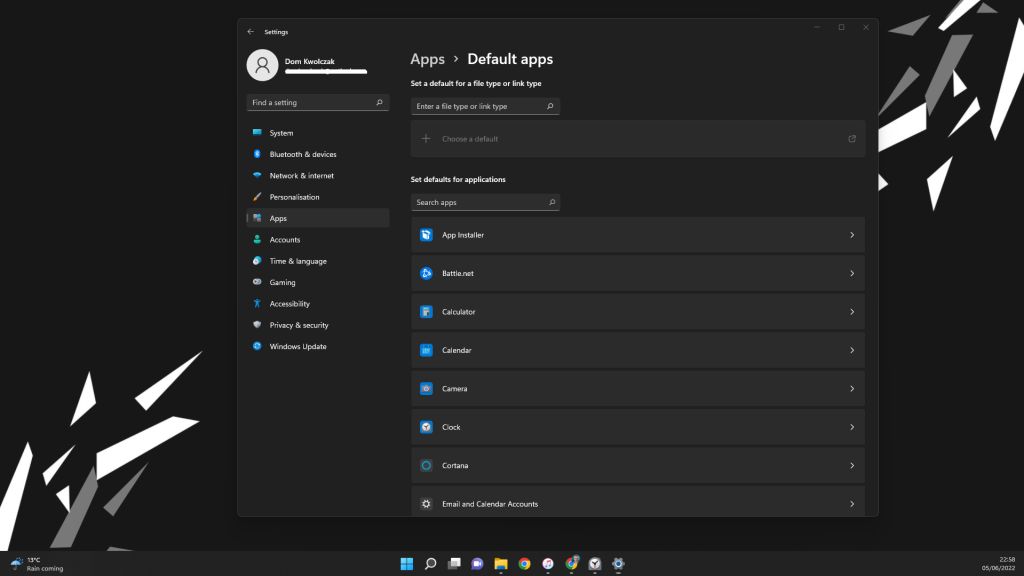 Unfortunately, Microsoft has made changing default apps more cumbersome as you now have to specify a default app for every file type whereas with Windows 10 it was easy to just change based on the type of program it is, e.g. browser, photo app etc. I suspect that this may be an attempt at pushing Microsoft’s default apps, which I’m actually becoming a huge fan of. I’m already planning to switch my default desktop browser to Edge!

However, everyone has their favourite apps, therefore I will show you how to go about changing the defaults. Start heading off to the start menu (see what I did there) > Settings > Apps > Default Apps and click on the app you want to set the default file type for, this will present you with a list of compatible apps, from there you simply select the new app. As you can tell, not the greatest process but hopefully this will soon change!

If like me, you like to multi-task, Windows 11 does it right! Hovering over the maximize button gives you 6 views to choose from, all of which will organise your open applications on a clean and easy to look at desktop.

9. Use Task View to See What You Have Open

One of the most annoying things about previous versions of Windows is trying to find that window you have open when you have a dozen other windows open, it was time-consuming and just annoying. In recent years, Microsoft has changed that with the addition of the task view feature. Now, this isn’t specifically new to Windows 11, but they have made it easier and more obvious that it exists with the redesigned icon.

Personally, I’m a huge fan of this feature because it enables me to organise my desktops and be more productive. One example of how I used this feature is back when I was at Uni, it was on Windows 10, I used one virtual desktop for research and the other for actually writing reports. Now, this was on Windows 10 and I discovered it thanks to a good friend because the overall option was less obvious.

To make life even easier, you can actually switch between the desktops by pressing the Windows key and either the left or right arrow key. This will allow you to quickly switch between desktops without losing productivity.

I find this feature to be particularly useful if you’re using a laptop or a computer with just one screen as it makes my workflow more efficient.

This isn’t a specific tip related to Windows 11 but one I’d thought to mention as it’s something we tend to forget about quite easily when setting up a new system. My full guide on what you should do after installing Windows can be found here.

Windows 11 comes with Microsoft Security (Previously Defender) pre-installed which is a pretty good antivirus program and advisor built by Microsoft. It’s even been rated as a top product by AV-TEST, an independent IT-Security Institute. That’s pretty impressive compared to what it used to be back in the early days of it when it used to be called Microsoft Security Essentials. So unless you prefer a specific brand of antivirus software, you don’t actually have to worry about purchasing new software!

Securing your system also includes making sure that all your files are backed up securely. I like the idea of OneDrive being set as your main file location for your documents because it keeps a copy away from your computer so if it was to break, at least you still have the files. As an IT professional, I also recommend backing up from OneDrive! There’s an old saying “you can’t call it a backup until you have at least 3 copies”.

Hopefully, I was able to help you out with this article. Windows 11 is definitely a step forward in the right direction for Microsoft. There are a lot of mixed feelings about this version of Windows with some people hating it and some loving it. Hopefully, we will be able to see the system progress into something really cool!

If you are still hesitant about upgrading, I highly recommend trying the system out for yourself. I created a handy walkthrough guide which will show you how you can try it without actually installing it!

Hopefully, you’ve enjoyed my article. If you have commented below and let us know whether you have upgraded or whether you are planning to upgrade. Do checkout my newsletter – I send a behind the scenes summary on an every 2-week basis and I don’t spam.

Manage Cookie Consent
We use technologies like cookies to store and/or access device information. We do this to improve browsing experience and to show personalised ads. Consenting to these technologies will allow us to process data such as browsing behaviour or unique IDs on this site. Not consenting or withdrawing consent, may adversely affect certain features and functions.
Manage options Manage services Manage vendors Read more about these purposes
View preferences
{title} {title} {title}