Answering Your Questions About The TicWatch Pro 3 Ultra!

Is This The Best WearOS Smartwatch? 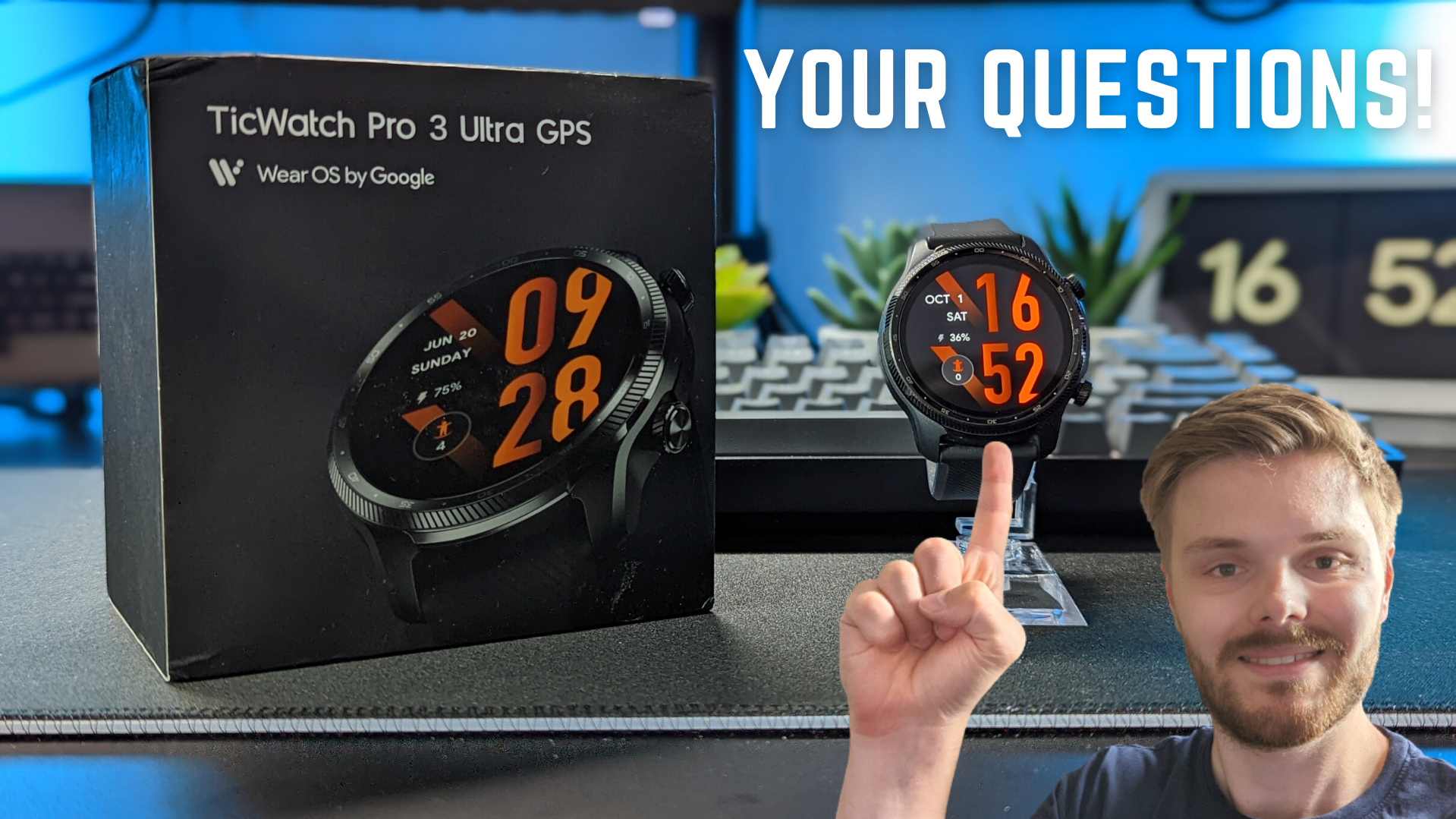 It’s no secret that I’ve been driving the Mobvoi TicWatch Pro 3 Ultra daily for the last 6 months. Based on my own experience, I think that Mobvoi really has done a great job with this watch.

Traditionally, I like to make 6-month update reviews here at Tech With Dom. When I was writing the script for the review I will be making about the TicWatch Pro 3 Ultra, I decided that it would be a great idea to ask you, the audience questions you want me to answer.

So without any further ado…

When Will WearOS 3 Be available?

This is a question I get a lot and one I am eager to find out myself! But unfortunately, I don’t hold this kind of information.

Judging by my own research, it looks like Samsung may have an exclusivity window on WearOS 3, at least until the Pixel Watch is released.

You can read more about this here…

What Is My Experience With Mobvoi Support, If I Have Any?

That’s an excellent question and one that many reviewers tend to overlook. I had indeed contacted Mobvoi support by email when I had a battery drain issue. They replied to me in a timely manner and they provided me with the information provided.

Do Stats Update In The App?

To be truthfully honest, I don’t really use the Mobvoi health app on this watch, I allow it to sync with Google Fit and Strava. I haven’t really had a major issue with the Mobvoi app. There were rare times when data hasn’t synced over, but refreshing the app helped on every occasion.

How Accurate Is The Watch Compared To Others?

As of yet, I haven’t had any issues with the accuracy. I tested it alongside my Garmin Instinct and Xiaomi Mi Band 7 on a few occasions whilst sleeping and doing activities such as walking and cycling.

The results were very close on all occasions. I have read that some people are experiencing issues with accuracy. But it’s not something that I’ve experienced over the past six months of me using the watch.

How Is The Battery Life?

The battery life has been absolutely great over the past 6-months. On an average day in my life, the watch would last anywhere from 2 days to 2 and a half days depending on usage. Sometimes even 3 days!

However, over the past couple of weeks, I have noticed that the battery is draining a lot faster than it should be. I contacted Mobvoi support via email because I was concerned that it was a hardware issue. They recommended resetting the watch to factory settings, something I was trying to avoid. But it worked!

So I can only assume that I was being an idiot and accidentally enabled something that uses a lot of battery power. But at least it’s fixed now!

Have You Taken It Swimming?

I have indeed taken it swimming, but not as often as I would like to have. Unfortunately, the facilities aren’t that great around my area and anything decent has shut down. But I have taken it with me on holiday, or vacation for those of you in the states.

Back in August, we went to Budapest in Hungary, a city that is famous for its thermal baths. I’ve worn the watch at the famous Széchenyi Thermal Bath as well as Palatinus Strand Baths, which is more of a water park with a swimming pool as well as slides and even a wave pool.

Now due to my previous experience of me killing my Samsung Galaxy Watch in the water, I was very cautious not to have it anywhere near fast-running water and not to damage it in any way.

If you haven’t yet followed me on Twitter and Reddit, it would mean a lot to me if you did!

Would I Recommend This Watch After 6-Months?

I still think that this is a great choice if you are in the market for an Android-based smartwatch. It performs well, looks great and just works. My only complaint about the watch is the lack of WearOS. But it’s not something that we can blame Mobvoi for.

I will continue using the TicWatch Pro 3 Ultra, I mean it’s hard not to! Although, I am seriously considering purchasing the Google Pixel Watch. But there will be more on that next week!

6 Awesome Gadgets You Need For Your Desk! How OneDrive Saved Me As A Student And Why You Should Use It!
Manage Cookie Consent
To provide the best experiences, we use technologies like cookies to store and/or access device information. Consenting to these technologies will allow us to process data such as browsing behaviour or unique IDs on this site. Not consenting or withdrawing consent, may adversely affect certain features and functions.
Manage options Manage services Manage vendors Read more about these purposes
View preferences
{title} {title} {title}