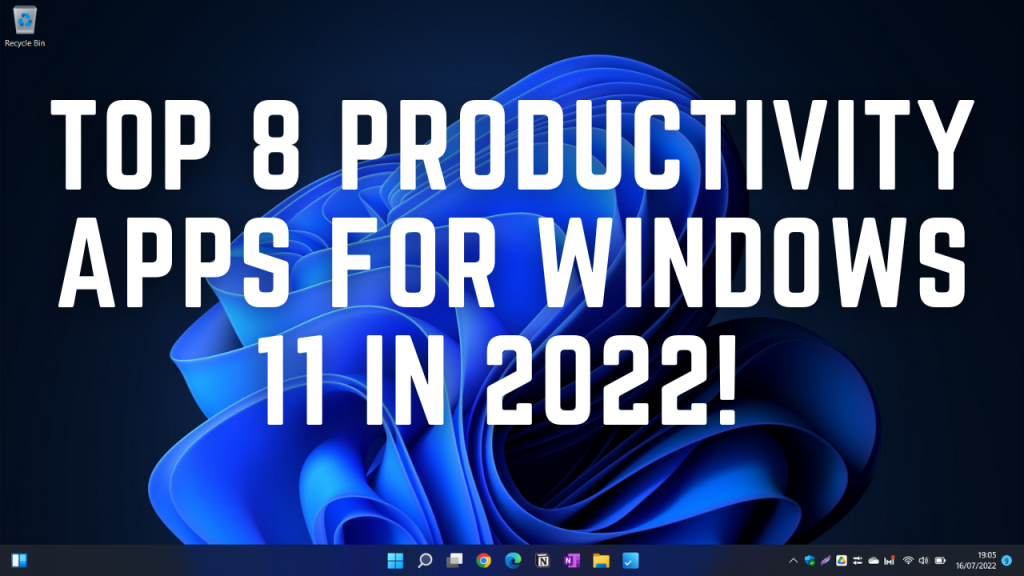 I’ve been on Windows 11 since before the official release and I think it’s a great operating system. It’s the one thing that stopped me from switching to macOS full-time.

Microsoft has completely revolutionised Windows 11, not only from the performance point of view but also the productivity.

At present, I have Windows 11 installed on my gaming rig and my laptop. I’ve upgraded my family’s laptops, something which they are surprisingly thankful for, at least that’s what they tell me.

Anyway, being a bit of a productivity geek, I decided that it was time to write an article about the top 8 apps that I use on Windows to be more productive.

Starting with a surprising choice, the clock app, that’s the one built-in to Windows 11! Microsoft has done a really good job with the Clock app, particularly when it comes to productivity.

The app now features a “Focus Sessions” area which is arguably a really nice looking productivity dashboard featuring a Focus time, your To Do list, Spotify as well as your productivity score.

Starting with the focus timer, it allows you to use a technique called Pomodoro which practically got me through university. The technique works by you setting a timer (usually 25 minutes) and during the 25 minutes you do nothing but work on the task you’ve set out to work on, so no distractions, no going on TickTock, no nothing. Once the timer is up you are treated with a 5-minute break where you can do whatever you want.

Unfortunately, at present, there isn’t an option for a 25-minute timer, but there certainly is for a 30-minute one.

The app also syncs with the Microsoft To-Do app (Previously known as Wunderlist). These tasks will show up on the Focus sessions dashboard page. I like that it only lets you select one list at a time so that you can focus on that particular thing.

The app also shows your daily progress which I find pretty motivational.

I recently discovered Quick Look and it really has changed the way I work on Windows. The app allows you to simply preview files without actually opening them, something which Mac users are very familiar with.

Unfortunately, Windows doesn’t yet have this feature built-in, but not an issue because the free Quick Look app is great! Simply highlight a photo or video and press the space bar on your keyboard, the file will magically be previewed to you!

This app has really improved my productivity as I no longer have to wait for files to open just to see them.

As a content creator, I often find myself taking a lot of screenshots

Lightshot is an app I’ve been using for a very long time, and it’s still my go-to screenshot app today. It’s light, simple and fast, what more could you want from a screenshot app?

I fully understand that Windows has its own snipping tool built into the operating system, however, I find it slow and cumbersome. Light shot just works so much better by darkening the screen, it then allows you to select an area and presents you with a few basic editing options as well as an option to either save or copy your edited screenshot.

The built-in snipping tool has a lot more steps, which slow down the overall process which is one of the main reasons I don’t use it.

When it comes to storage, I choose to store my files in Google Drive, simply because it’s integrated with the Google suite of apps such as Gmail and Google Docs, apps that I constantly use.

Google Drive is also relatively cheap and there are options if you require more than 1TB of storage space.

If I wasn’t using these apps and the storage space, I would most likely be sticking to OneDrive as it integrates so well within the system.

Google Drive also has an option to backup folders inside of your computer. So for example, if you need to backup your Documents folder, it will back it up for you, should you want it to.

The one thing I love about Google Drive within Windows is that it’s detected as a hard drive inside of your PC and to make things even better, it will act like it should you need it to. For example, if you don’t want the files to be taking up storage space on your computer, simply set the app to stream them instead. This will allow you to only store the files you need on the drive saving you storage space.

I’m no superman, I can’t always remember the tasks I need to be getting on with throughout my week, although it would be nice if I could. That’s why I use a To Do list app. In the past, I really liked Things 3, but since moving to an open ecosystem with my smartphone being the Pixel 6 Pro, I found myself in the market for a new app.

I tried many apps and over the last 3 months I’ve been using TickTick religiously, but I didn’t get the same feeling I had with Things 3. The only two multi-platform apps I came to like is Any.do and Microsoft To-Do (Previously Wunderlist).

At present, my go-to To Do list app is Any.do. I use it for Tech With Dom as well as for managing my personal life. Although it’s not the only app I use. I came to really like Microsoft To Do and I use it to manage my working life.

The main two advantages of using Any.do is the beautiful, clean interface as well as wide support for various devices.

Unfortunately, I do have complaints such as the lack of smart features. For example, if I create a task that states: Complete blog post tomorrow at 7 pm it would use tomorrow and 7 pm to set the time and date the task needs to be completed by. Unfortunately, this feature is non-existent in Any.do.

OneNote is my go-to Notebook app. I’ve been using it for years and I find it difficult to find a suitable replacement having tried the likes of Evernote as well as several others.

The app is available on my phone, my laptop, computer and iPad making it a great multi-platform option.

The layout of the app makes the notebook very easy to manage and organise and if we combine it with other features such as the ability to write with your Apple Pencil, integrate things and collaborate with others, it’s the perfect app for note taking.

I recently made the decision to switch browsers. I seem to be very stubborn with the browser I use, I just can’t seem to sit still and stick to a browser. But I somehow managed to stick with Chrome for a good couple of months.

Having decided to give Edge one last chance, I was pleasantly surprised. Not only does it have a very pleasant interface but it also performs extremely well! As it’s based on the Chromium project, it can even run extensions from the Chrome web store.

The one feature I find extremely useful is virtual tabs as it allows me to have more tabs open at the same time without actually making the tab smaller. This feature is perfect for research and busy workflows.

The final app in this article is TeraCopy, a file transfer utility with a lot of very useful options!

One of these options is the ability to verify the data you’re copying to make sure that it’s all there. This is particularly good if you transfer large sums of data from one device to another..

There are many decent productivity apps for Windows, the apps mentioned in this article, are simply ones that I use. If there are any apps that I missed out on and you think I should give a go, let me know in the comments section!

Why I Left The Apple Ecosystem Are The Sony WF-1000XM3’s Still Relevant In 2022?
Manage Cookie Consent
We use technologies like cookies to store and/or access device information. We do this to improve browsing experience and to show personalised ads. Consenting to these technologies will allow us to process data such as browsing behaviour or unique IDs on this site. Not consenting or withdrawing consent, may adversely affect certain features and functions.
Manage options Manage services Manage vendors Read more about these purposes
View preferences
{title} {title} {title}