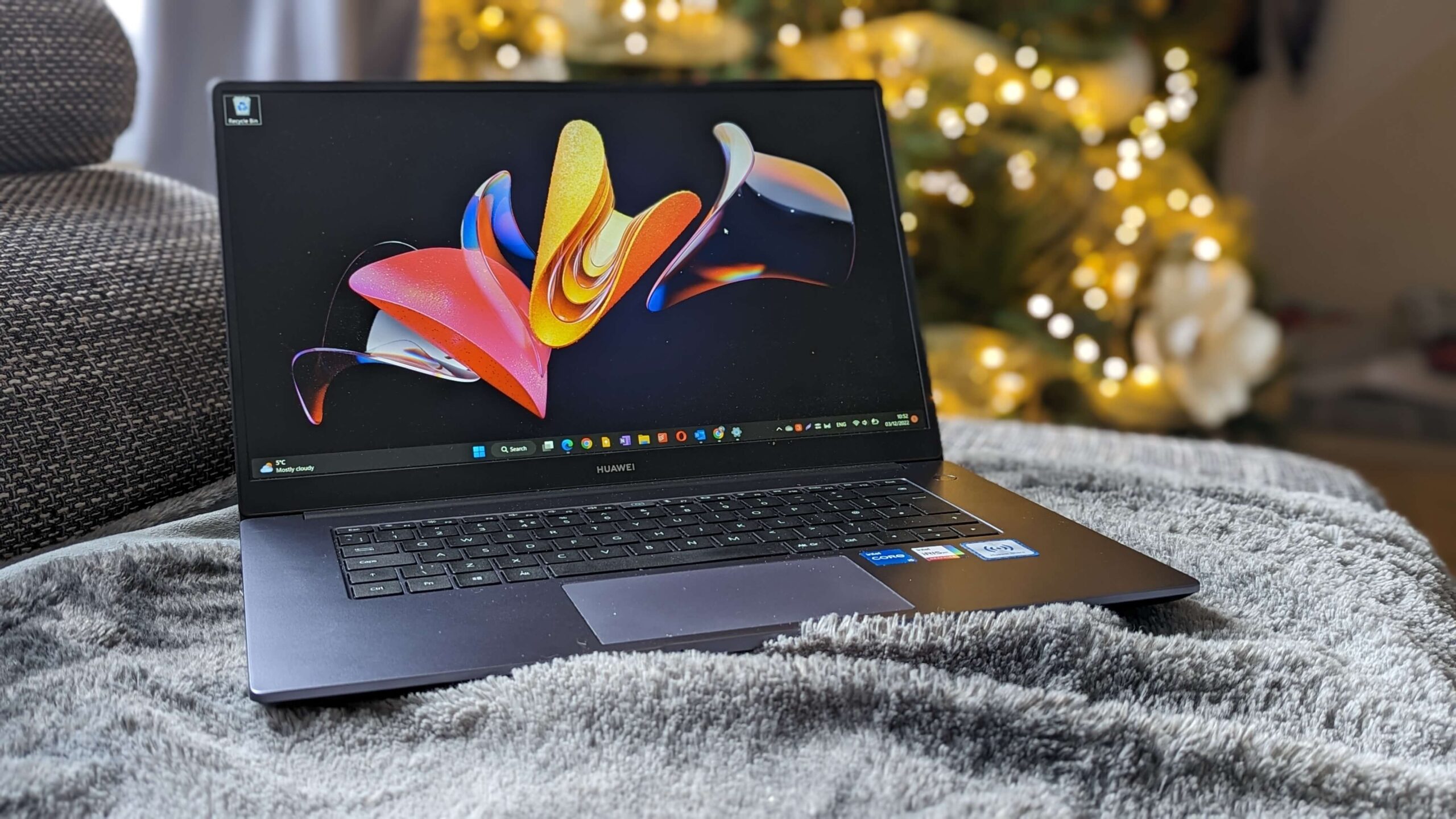 It’s been around 6-months since I last talked about my laptop, the 2021 Huawei MateBook D15 and I feel a bit guilty because there is a lot to talk about. I mean, for starters, it’s actually quite a good laptop for general use and not only!

When I’m away from my desk, I mainly tend to use my iPad for basic video editing and writing blog posts. But there are occasions when using a laptop is more suitable. That’s why around 6 months ago I found myself in the market for a new laptop.

At the time, my budget was limited and I was considering going second-hand, but that’s when I came across a handful of decent-looking brand-new laptops that match my needs specification-wise. The Huawei MateBook D15 was one of them.

Like with many laptops, there can be several variations of the same model. At the time of purchase, there was an AMD version and an Intel version available. I decided to go with the Intel i5, 8GB of RAM, 512GB Storage and Intel Iris Xe Graphics.

How Does It Perform In Everyday Life?

If you’re into benchmarks and highly technical information, unfortunately, you won’t find it here as even though I am technical, I like to talk from a user’s perspective. But saying that, whilst the laptop can be considered mid to low spec, I think it performs extremely well.

As someone who uses the laptop primarily for writing and basic video editing, I didn’t really have the need for a high-performing laptop, I wanted something that will work and the Huawei Matebook D15 does just that.

The first thing that surprises me is how fast this thing boots and logs me into my account. It takes 17.97 seconds to boot and log me in with the help of the fast fingerprint sensor on the power button!

That sort of speed is ideal when you’re in a cafe or on the train and just need to get on with work. By the way, if you like the wallpaper, I’m using check out this awesome wallpaper pack by Christopher Lawley from The Untitled Site! He’s got some stunning wallpapers!

In terms of the overall performance, I never really had any issues even when editing videos with Filmora which is my go-to video editing software on PC. I am comfortably able to edit 4K footage and even render it without any issues.

The Look And Feel

The Huawei MateBook D15 definitely looks like a premium laptop, especially with that metallic look and thin bezels. But you’re probably expecting it to feel bad, well that is simply not the case!

Starting with the trackpad, the trackpad has a glass finish with gesture control which feels really nice to the touch. I find that many laptop manufacturers don’t get this right and the touchpad just feels bad, particularly at this sort of price range. But Huawei has certainly done a great job here.

Moving on to the keyboard, it does initially feel cheap to type on but that cheap feeling is overwritten by how comfortable the keyboard is to type on, especially at high speeds. My only complaint here is that the laptop has a lot of space available on both sides of the keyboard and if they have moved the keyboard to one side, they would be able to squeeze in at least a basic number pad, which is something I do tend to use.

But overall, the laptop looks and feels like a more premium laptop. In fact, I had several people think that it was a more expensive laptop and when I told them the actual price they were stunned!

Traditionally as it goes with tech sometimes, not everything is 100% perfect, and the Huawei MateBook D15 has a few issues. The first one is the fact that the RAM is not upgradable, which is a real shame, especially in this day and age. At the time of purchasing this laptop, I was hoping to upgrade it to have at least 16GB of RAM but I couldn’t find any information online on whether it was upgradeable or not. But I took the gamble and failed.

Working with laptops and supporting them in my daily job, I honestly think that 16GB is the minimum amount of RAM people should go for these days. I mean writing this blog post on my laptop and having Chrome, Outlook and a few other background tasks open is already taking up 6GB of Memory!

Surprisingly, it hasn’t yet impacted the performance of the laptop. I tend to use Microsoft Edge these days which uses a lot less RAM, but for this test, I decided to use something everyone is more familiar with, Chrome! I guess it was to show you how the laptop performs for someone that uses Chrome which is still a far more popular option than Edge.

Unsurprisingly, the biggest memory hog was Chrome and no, those aren’t tabs open, they are basic add-ons which I also seem to have enabled on Edge, so I’m not sure why it has so many processes!

My Second complaint is the location of the webcam, which is actually a button on the keyboard, which can actually be seen as a good idea, especially from the security point of view. But it does make it hard to look at the screen when you’re talking to someone, something which I demonstrated well here.

My final complaint about this laptop is that it only has a single USB-C port which is used to charge the device. It’s great that the laptop is using USB-C but don’t let that fool you as the laptop does not support video over USB-C. For that, you have to use the built-in HDMI port.

Whilst there are a few areas where I think Huawei could have done better, these areas haven’t changed from my initial review which is actually a good thing! I mean I’ve been using the laptop for 6-months and haven’t had any issues or noticed any new issues since my initial review which is something I can’t say the same about my far more expensive previous laptop the HP Pavilion 14-CE0505SA which I was constantly finding new issues, the main one being performance.

I am happy to say that I will continue using this laptop for a lot longer as it has honestly been problem free even after the Windows 11 update, which I upgraded to without formatting the laptop, something that I have seen cause issues before.

Whilst the laptop only has 8GB of RAM, it hasn’t given me any serious issues as of yet. I don’t know maybe I’m naturally more preserved about the software I have running when doing more resource-intensive tasks. But the laptop has certainly not given me any issues. I still wish it was upgradable to at least 16GB.

Overall I really like this laptop, it’s not too expensive, you really are getting a lot for the price which by the way was £499.99 which is about $614.99 for those of you in the States.

My Review, Unboxing and First Impressions

Manage Cookie Consent
We use technologies like cookies to store and/or access device information. We do this to improve browsing experience and to show personalised ads. Consenting to these technologies will allow us to process data such as browsing behaviour or unique IDs on this site. Not consenting or withdrawing consent, may adversely affect certain features and functions.
Manage options Manage services Manage vendors Read more about these purposes
View preferences
{title} {title} {title}