Home » Blog » Productivity » How I Use OneNote As A Content Creator

It really is an underrated App! 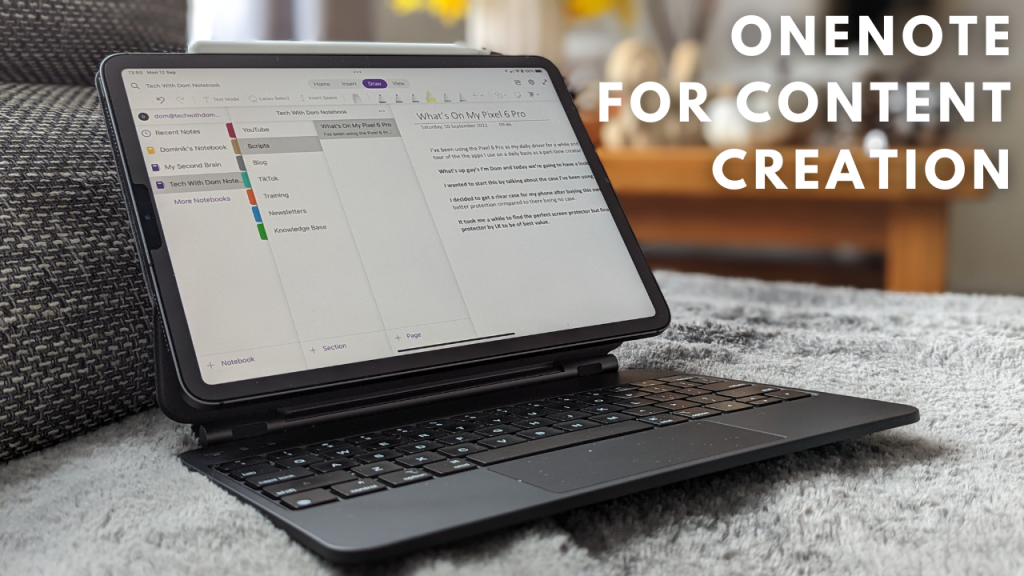 OneNote is one of those useful apps that have been around for a very long time, in fact, it was initially released as early as 2003! With that being said, I’ve been using OneNote for a very long time for numerous uses including revision for my GCSEs, university notes as well as projects.

I currently use OneNote for several reasons including content research, YouTube scripts and even as a technical knowledge base. I also use it as my second brain, but we’ll get into more details later in this article.

There are many notebook apps out there, you have EverNote, Apple Notes, Samsung Notes and even Google Keep up to a certain extent, and they’re all pretty good. Although at present, I don’t see Google Keep as a NoteBook app, I see it as more of an area to quickly jot down notes, in effect, a second brain.

OneNote has been in my life for a very long time and whilst I have tried other apps, I always seem to go back to OneNote. It has many useful features, particularly for tablets.

I use OneNote on my iPad Pro along with my Apple Pencil and PaperLike Screen protector to get the best possible writing experience. I use my Apple Pencil to make notes, plan out my videos and even make notes from meetings and online courses. The experience is just so good!

How My iPad Pro Became My Primary Computer

One of the main things I love about OneNote is the fact that it’s multi-platform, I can have it on my iPad, my Pixel 6 Pro, my computer, the web, and even my watch! As someone who is living in an open ecosystem, I find that absolutely extremely convenient.

I mean, let’s face it, when it comes to the iPad, there are many great apps out there, such as GoodNotes and Notability. But the one issue I have with those apps is the fact that they aren’t multi-platform.

Another thing I like about OneNote is that the apps are actually very well-designed and allow me to easily make notes on the go. So if I wanted to, I could actually write a script on my Pixel 6 Pro. It’s one of those apps that is just perfect for when you’re out and about.

One of the main tasks I use OneNote for is content creation. I use it to plan out my blog posts and YouTube videos, as well as to research the topic I am referring to, to give you more reliable information.

I write my scripts in OneNote

It’s no secret that when it comes to making YouTube videos, I script a lot of my content. It’s simply so that I can give you more details and important information, I may forget to talk about when just talking in front of the camera.

For scripts, I follow a process of typing spoken footage (a-roll) in bold and when it comes to product closeups or demonstrations (b-roll) I leave it as is. This is a process that MKBHD uses and I find it incredibly useful. Speaking of which, if you are an aspiring YouTuber like me, I highly recommend checking out his course on Skillshare (Not advertising).

I’ve tried writing scripts on various software including Google Docs, EverNote and even Apple Notes, but I found that OneNote offered me the best experience. Particularly because I can continue writing a script anywhere I am on my phone.

I Use OneNote For Research

Research is a key part of being a content creator, it allows us to ensure we are giving you value by sharing reliable information that has been confirmed. OneNote is a perfect tool for research, particularity for taking notes and analysing things.

The main reason I use OneNote for research is the fact that it’s available across multiple platforms, which means that I can make notes and do research from practically anywhere!

For example, during last week’s Apple Event, I happened to find myself on a train home from my 9 to 5 job and as a result, I ended up watching the event on my Pixel 6 Pro. The truth of the matter is that the Pixel 6 Pro, coped with the event really well and because Android phones have the split screen option, I was able to take notes from the event using OneNote.

OneNote has many useful features for research, I mean one of my favourites happens to be the ability to import PDFs which I can then proceed to annotate with my Apple Pencil. This is a feature I found incredibly useful whilst at university, and I still find it incredibly useful until this day! I still like to browse through academic papers when I’m looking to write or talk to you about valid points subject experts may have made. It’s also good for highlighting points from books!

I Use OneNote as My Second Brain.

As a content creator, I think that it’s vital to have a second brain, well, for me anyway since I can’t remember everything that comes to my head! This is a concept I used since writing my first dissertation. This is a concept that I was first introduced to by a successful university graduate who said to.

“Always carry a small notepad and pen with you, ideas will come to mind during the most unexpected times like when you’re at the pub, having a beer with your friends, excuse them and quickly write it down”.

It wasn’t until I read Tiago Forte’s book on building a second brain, that I started calling it a second brain. In the past, I would just keep an unorganised note with ideas using the default Notes app on my phone. However, after reading the book and seeing videos about how others do it, I decided to stick with OneNote because it’s so accessible.

At present, I am contemplating migrating my second brain to Google Keep. The app is better suited to the entire concept, mainly because it’s basic and faster than OneNote which at times can take a while to load, and by the time it opens I often forget the whole idea altogether.

OneNote is a great app, but for something quick like a second brain, I need something faster, and Google Keep seems to fit the bill perfectly.

OneNote really is an underrated app, that not many content creators seem to be recommending these days. I really like the fact that it’s compatible across multiple platforms and that I am able to organise my content in an easy-to-understand way. I practically treat OneNote as a ring binder!

My only complaints about OneNote are the fact that it can be slow at times and the Office 360 program for Windows, I find that that interface is now dated and just don’t get along with it. I find that the OneNote App for Windows, which you can download from the Microsoft Store, is just so much better and feels more satisfying to use.

Do you use a Notebook app? Which app do you prefer and why? I’ll be looking forward to your comments!

Start Your Smart Home With These 3 Gadgets! These Are The Apps I Religiously Use On my iPad Pro!