1 Week With The Xiaomi Smart Band 7 – My Review

Over the past 8 years, Xiaomi released some pretty impressive fitness trackers starting with the original Xiaomi Mi Band which was released back in July 2014. During that time, I think it’s easy to say that I owned several fitness trackers including Fitbits Garmins and even the legendary Pebble!

However, for some reason, I always went back to the Mi Bands. I actually used to own two of them, the original and the Mi Band 2 which was released in June 2016.

It’s been around five years since I owned my last Mi band, I guess smartwatches have dominated the market. That’s why when I was offered to try out the latest variation of the band I was extremely excited!

In this article, I will talk about how my 1 week with the Xiaomi Smart Band 7 went and whether I still like and recommend the product. Be sure to check out my review video below…

My Week With The Xiaomi Smart band 7

In a nutshell, my week with the Smart Band 7 went really well and I definitely think that it has the potential to become my everyday watch.

As a daily device, the Smart Band 7 works really well. The battery lasts over a day during heavy usage and in terms of performance, there is no lag which is something I can’t say about other trackers at that price range.

The band is ultra-light and comfortable to wear. I can easily say that it’s one of those devices that you sort of forget about as you go about your daily life which is something I like. I find that there’s nothing worse than having a very heavy device during workouts.

I think that the screen is the star of the show here because with its AMOLED display it’s easy to see even in direct sunlight, which is how it should be, after all, it is a sport watch in effect.

Overall, as a daily device, I think that it’s the perfect addition to your everyday carry. It’s cheap and cheerful meaning that you don’t have to worry about not damaging it.

How Did It Perform?

During my one week of testing, I had the opportunity to test it in a number of environments and with different activities. Starting with just a basic walk. I often find myself walking to the train station, particularly when there are no rental scooters available. The walk is roughly 2.4 miles and takes me around 20 minutes to walk. This was an easy task for the Smart Band 7 and it performed really well with it providing an accurate map reading as well as data that I was expecting when I compared it to similar walks I tracked with other devices.

One of the other activities I do to keep fit is cycling, I find that it’s a great way to explore the beautiful British countryside. I decided to take the band along with me to track my ride. As expected, the band performed well, whilst the ride was only 2 hours long, I was able to get a suitable result from it just like with the walk.

One thing I noticed was that it had issues with starting activities from the band that uses GPS. The band would just hang at the positioning stage. It turns out that I wasn’t using the correct app. As I imported the band from China before it was released to the rest of the world, I was using the only app that was available at the time which was the Zepp Life App, but since the making of the video the, Mi Fitness app has had the Smart Band 7 added and the problem is no longer existent.

My Opinion After A Week

To summarise my week with the band, I really enjoyed using the band and I’m actually still wearing it now as I’m typing this post. I think it’s the AMOLED screen that sets the device apart from others because it makes it easy to use even in direct sunlight. The battery life is very reasonable and I only had to charge it a very small amount of times. 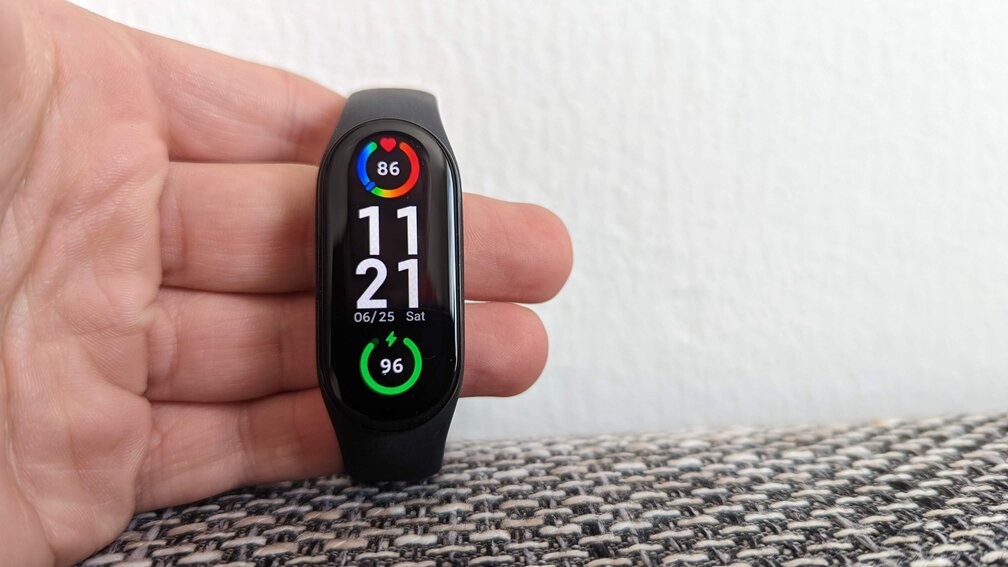 The Smart Band 7 has a modern design featuring a beautiful AMOLED display, and yes, I know I said this a few times already but I guess I just can’t get over how good the display is on this band! Staying with the already bright display, you can even further increase the brightness of it making it ideal for use with those outdoor activities in direct sunlight. This display is also slightly bigger compared to previous models.

Moving on to the interface which is the one thing that the AMOLED screen needs to look its best! The interface is clear and well thought out making the device easy to use and understand. I’m a huge fan of the interface and I think that it really does complete the overall look and feel of the device.

Unfortunately, the band itself is nothing new and it’s something that Mi Band veteran users will recognise really well. To be fair, it’s a design many brands use for their smart bands. However, I don’t have a problem with that because the band feels comfortable and is light. In fact, I often forget that I’m wearing the device – that’s how light it is! The big disadvantage to the actual band is that bands designed for older models will not fit as the screen on the Smart Band 7 is larger.

The App Or Should I Say Apps

As I mentioned before in this post, I received the band before it was widely available outside of China and because of that, the Mi Fitness App didn’t have an option for the Smart Band 7 to be added. During my week of testing, I ended up using the Zepp Life app which is an app built by Huami, the same brand that develops the Zepp app for the Amazfit watches.

The Zepp life app is a pretty nice app but it does have its issues one of them being that for some reason the band didn’t like connecting to the app to start a GPS activity such as cycling. Being a troubleshooter at heart, I found that starting the activity from the app solves that problem.

The second issue I had with the Zepp life app was that it didn’t natively support Strava which is a service I use a lot. In fact the only service it supported was Google Fit, therefore as a workaround, I found that downloading the Amazfit version of the Zepp app gave me access to Strava and other services once I logged in with my Xiaomi account. I created a guide on how this could be achieved here. The screenshots below show the differences between the two Zepp apps. On the left, we have the Zepp Life (Mi Fit) app and on the right we have the Zepp (Amazfit) app.

Zepp Life is actually the new name for the previous companion app Mi Fit. I know that this is confusing, I was a bit confused too but at least I now understand the differences and why they’ve taken this approach.

In regards to the Mi Fitness app, I haven’t had a chance to test how it works with the Smart Band 7 but I already have experience using the app as demonstrated in my Xiaomi Mi Watch Lite video, which I highly recommend checking out.

The Xiaomi Smart Band 7 is the first dedicated activity tracker I’ve used in a long time, but it certainly wasn’t the last. The last tracker I used happened to be the Samsung Gear FIT 2 Pro which I remember being very satisfied with. Xiaomi on the other hand has been making pretty successful fitness trackers for a very long time, and without question, the Smart Band 7 belongs to that group of successful trackers.

The band has definitely won me over! I’m still wearing it after testing it for a week! As you can tell, I’m very happy about the larger display that is also AMOLED. Whilst I have had a confusing start with the apps, I will now continue testing the band whilst using it with the Mi Fitness app, which I hear has some small issues, which I haven’t faced with the Mi Watch lite but I guess I will find out over the next week or so. Hopefully, the Mi Fitness app is only a few updates away from perfection!

I do miss having the built-in GPS function and find it a shame that it wasn’t included in this version of the band, but then again at that sort of price range, you can’t expect too much, maybe if they have a pro version in the future but certainly not at this price range.

Who Is This Band For?

The Xiaomi Smart Band 7 is ideal for anyone looking for a budget-friendly fitness tracker. Whether you’re planning to use it for tracking your daily fitness or even for sports such as running, cycling or even the gym, it’s absolutely ideal for that. However, if you’re doing activities such as mountain climbing or anything else that may require the use of a built-in GPS as well as other sensors, I would recommend going with something more professional, such as the Garmin Instinct which is more of a watch.