A Great Phone at A Great Price! 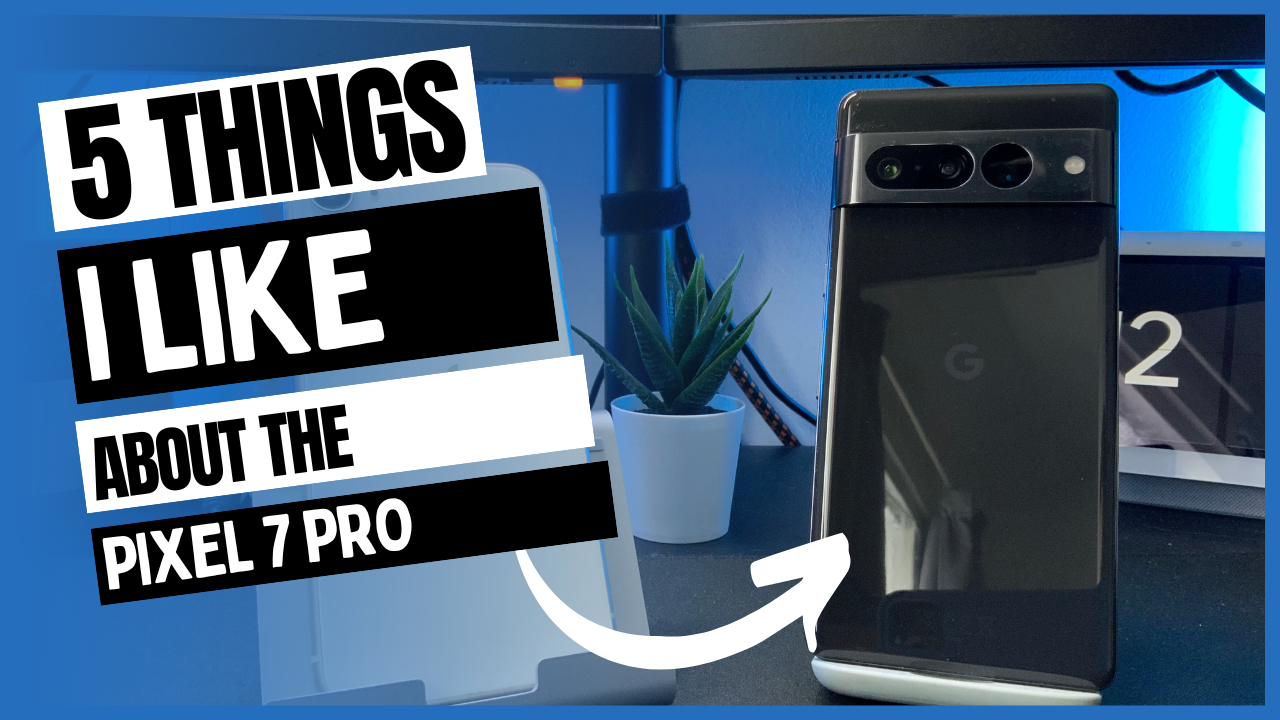 With all the good publicity the phone has received, I naturally had to try it out for myself, so I decided to purchase it. Although I was tempted by that gorgeous Hazel colour, I decided to go with Obsidian, which I think looks even better!

I’ve now been daily-driving the Pixel 7 Pro for around a month and I think it’s fair to say that I’m delighted with it I mean, it looks great and performs incredibly well, and I haven’t experienced a crash yet, something I experienced quite a lot on the Pixel 6 Pro.

1. The Design – It Looks Stunning!

At the time of writing this article, the Google Pixel 7 Pro is available in 3 different colour options, Hazel, Obsidian and Snow. Having seen each colour on display in a shop, I decided to go with the Obsidian which I feel has this elegant look.

My one complaint about the Caseology Parallax case is that it hides too much of that stunning camera bump.

Having used the Pixel 6 Pro, one of the first things I noticed is the improved battery life, this is thanks to optimisation. I mean both phones share the same 5000 mAh capacity and yet the Pixel 7 Pro feels that it lasts longer.

On an average day in my life, I would usually have to recharge the Pixel 6 Pro in the afternoon after using the phone for the entire morning listening to music, taking photos and browsing social media. This was so that the phone could last me the entire journey home from work which usually takes around 1 hour and 30 minutes.

But with the Pixel 7 Pro, I just don’t need to do that as of yet, which is a huge improvement to me personally!

Just like its predecessor, the Pixel 7 Pro has an incredible camera, but it’s worth mentioning that it’s the software that improves the photos and makes them stand out.

The Pixel 7 Pro has a triple-camera system at the back with a 50MP lens, a 12MP ultrawide and a 48MP telephoto lens. On the front of the phone, there is a single hole-punch camera which has a 10.8MP lens.

Now, I’m not a photographer, nor do I claim to take professional-looking photos, but the photos that I do take really do come out looking professional. Especially the portraits.

I haven’t really had a chance to record many videos with the Pixel 7 Pro, but out of the few I have recorded, they come out great, but I haven’t noticed much of a difference from the Pixel 6 Pro, well other than the camera not crashing.

Unlike the 6 Pro, the Pixel 7 Pro offers a cinematic mode which I haven’t managed to get my head around yet, but it’s a welcome feature on any flagship.

The thing that really sets the Pixel 7 Pro apart from the 6 Pro is the performance, especially if I compare it to the Pixel 6 Pro I had. I don’t know if it was just my phone or if others have experienced the same, but my Pixel 6 Pro would constantly crash, especially in the camera app.

Updates seem to have calmed the situation on the Pixel 6 Pro down, but crashes would still occur from time to time. After using the Pixel 7 Pro for around a month, I haven’t yet experienced a single crash and the phone is snappy and just works as a flagship should.

I don’t really tend to play games on my phone, so I can’t really talk about game performance, but what I can say is that after recording 4K footage, the phone hasn’t gotten anywhere near as warm as my Pixel 6 Pro did.

I’ve used many Android launchers over the years, but my favourite launchers have always been the Pixel launchers. I felt that they always offered a clean and functional interface and user experience.

The Pixel 7 Pro launcher is no different and whilst it’s the same launcher you can find on the previous version, it still hasn’t prompted me to download a 3rd party alternative such as Nova Launcher.

My Thoughts After A Month!

To conclude this article, I think that the Google Pixel 7 Pro is a brilliant phone and possibly the best Android smartphone I ever had.

I mean for a flagship, the phone is actually rather cheap compared to Apple’s flagship phones. At the time of writing this article, you can get the 127 GB Pixel 7 Pro for just £849.00 and you can get a free FitBit Versa 4 with it on Amazon. Bargain!

But overall, I’m incredibly satisfied with the Pixel 7 Pro. There will be more content on my YouTube channel and my blog coming soon! While you wait, check out my video review down below…

Do you have a Google Pixel Phone? What are your thoughts on it?

5 Things I Learned After Switching To Android! 3 Subscriptions Worth Having In 2023
Manage Cookie Consent
We use technologies like cookies to store and/or access device information. We do this to improve browsing experience and to show personalised ads. Consenting to these technologies will allow us to process data such as browsing behaviour or unique IDs on this site. Not consenting or withdrawing consent, may adversely affect certain features and functions.
Manage options Manage services Manage vendors Read more about these purposes
View preferences
{title} {title} {title}