Is it worth buying an old iMac?

Apple is well known for building items of high quality with no exception for the older iMacs. But is it worth buying a 10 year old device? I decided to put this to the test, I decided to setup my old mid 2011 iMac and here’s what I think.

I definitely think it’s worth it but there are a few important points to consider, This article will explain these points in greater detail.

To start this article, I will explain why I decided to attempt to setup a device of this age. The answer is easy, I was setting up a small office area in my families house, and as their requirements are basic, I decided to utilise the old Mac. The device will mainly be used for checking emails and office work.

Setting up the iMac and first boot

Unsurprisingly, setting up was extremely easy, I just connected the power cord, network line, mouse and keyboard and booted the device. The initial boot took some time, after all the device hasn’t been powered on in a very long time. Once the iMac booted up, I found that it was running on El Capitan.

If you are planning to upgrade your own device, you are doing so at your own risk. Upgrading devices may cause damage. If you are not confident, please take the device to a local computer repair shop.

Initially, I was planning to, install Windows 10 as a boot camp, but then I remembered that Windows 11 was released and that it won’t be supported on this device.

As a IT Specialist, one of the main thing’s I always consider is future proofing. Yes, this device might fail tomorrow, but it may also last another year or two. It’s this mindset that will enable you to make the most of this device or any other older device you may have. It’s also important to spend as little money as possible on a device of this age for that exact reason. That’s actually the main reason I decided to abandon the Windows 10 boot camp idea, as Windows 10 licences can be expensive.

I looked on the device specification and found that it was running on a 500GB hard drive and only 4GB of RAM, which is below standards for a good computer in 2021. It was at this point, I decided that if this device was going to be used it needed an upgrade. I decided to purchase an additional 4GB of RAM to make it 8GB and I also ordered a Solid State Drive (SSD) to replace the old and slow mechanical hard drive.

I also decided to abandon macOS in favour for Ubuntu in order to give this device the best possible chance of a long life.

Using a different computer, I then created a bootable Ubuntu USB drive, there was nothing special about the way this drive was created, I just downloaded the ISO and used Rufus to create the drive. The video below explains how I was able to create the drive and then install Ubuntu.

In the same way as explained in the above video, I was able to install Ubuntu on the iMac.

To begin with, I was shocked at how smoothly the device was running, it was snappy and quick to boot. After spending some time configuring it and installing the required applications, I haven’t experienced a single crash, it was just working out of the box! Below are the full specs of the installation. 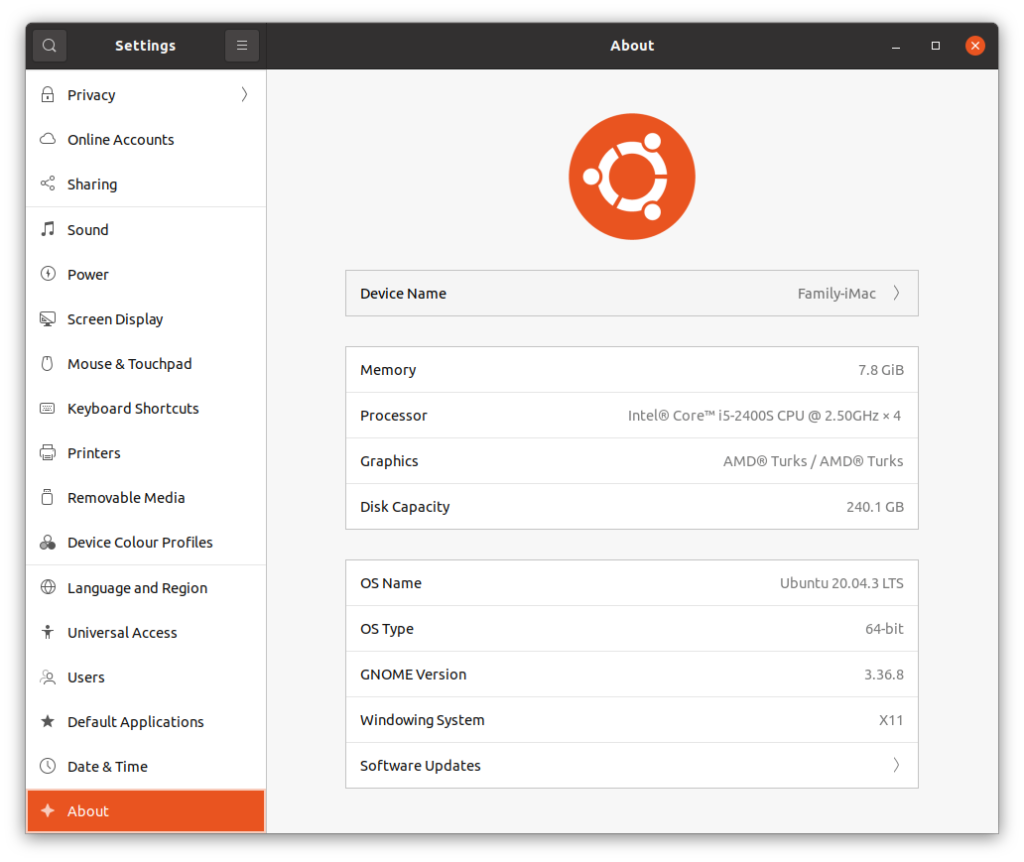 Did I face any problems?

Yes, as with many old Macs, I found that upgrading to an SSD caused the fans to go mad, in the past, I was able to install software to limit the speed and noise of the fans. Now I wasn’t able to find software for Ubuntu to control this, to be fair I barely looked as the fans appeared to be behaving, they may have been slightly louder then usual but not to an unbearable extend. My gaming rig is louder!

There are some points to consider before spending money on a older device.

Was it worth it?

Definitely! Would I recommend it? Depends on the price of the device. The Ubuntu iMac has been in use for a good few months since I wrote this article and I haven’t had a problem yet. What’s even more surprising is that my parents who aren’t very tech savvy, are able to use Ubuntu without any problems whereas with Windows 10, it was like Dom, how do I do this, Dom how do I do that. But they seem to be getting on with Ubuntu without any issues.

Now it’s you turn, have you upgraded an old computer or iMac? Let us know in the comments and feel free to ask any questions!

Did you like this article? Consider subscribing to my monthly newsletter below!

Why Does Turning It Off And On Again Work? How To Try Windows 11 Free Without Upgrading
Manage Cookie Consent
To provide the best experiences, we use technologies like cookies to store and/or access device information. Consenting to these technologies will allow us to process data such as browsing behaviour or unique IDs on this site. Not consenting or withdrawing consent, may adversely affect certain features and functions.
Manage options Manage third parties Manage vendors Read more about these purposes
View preferences
{title} {title} {title}